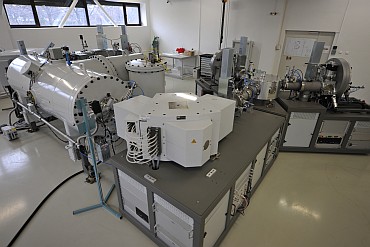 In 2012, based on research investment projects, the acquisition of a 1 MV AMS Tandetron system was funded within the Horia Hulubei National Institute of Physics and Nuclear Engineering (IFIN-HH). This system was built, installed and commissioned by High Voltage Engineering Europe (HVEE) and is the only AMS installation in Romania. The figure below shows the entire installation, which is comprised, from left to right, of the following subassemblies:

The main components of the 1 MV Tandetron

What is the AMS technique?

Accelerator Mass Spectrometry (AMS) is an ultra-sensitive analytical method that was developed based on classical mass spectrometry, from the need to measure stable or long-lived isotope concentrations less than 10-12 (isotope / element), for which the classical mass spectrometry is limited by the impossibility of separating the beam of the ion to be analyzed, by the interferences of the isobaric elements or molecules, whose mass differs by about 10-5 uam The increase of the particle energy, by using a tandem accelerator, has led to the increase of the separation power of the electric and magnetic filters used for this purpose, so that by using AMS a large part of the isobars are eliminated. Due to its exceptional sensitivity, this method has opened a wide range of applications in various fields, such as: medicine, archeology, paleogeomorphology, geology, atmospheric physics, paleoclimatology, astrophysics, nuclear physics, and last but not least the pursuit of nuclear pollution.
The 1 MV AMS installation was initially commissioned only to determine isotopic ratios for the following ion species: 10Be, 14C, 26Al. Subsequently, due to the growing interest in the world for measurements of actinides, especially plutonium isotopes in very low concentrations, it was decided to start studying the performance of the system for measuring ratios 239,240Pu.

More details can be found on the RO-AMS website